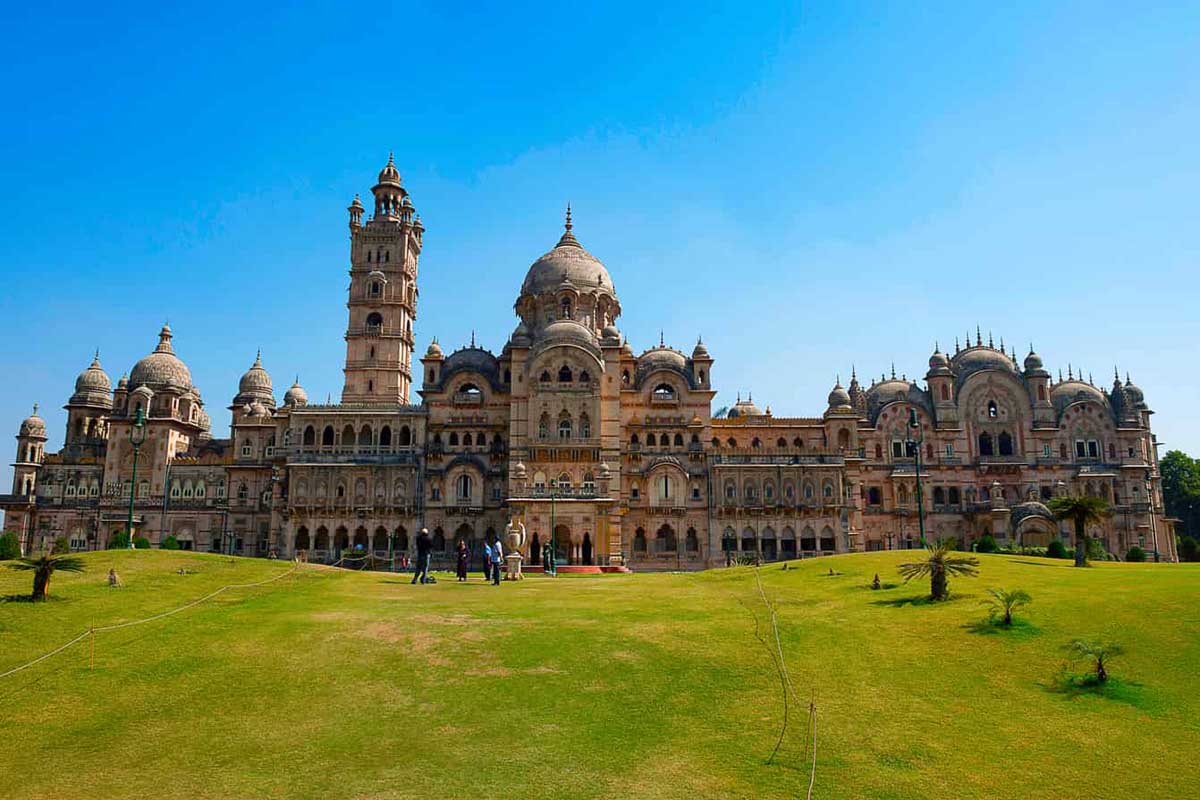 Gandhi Ashram – It’s located on the western bank of the Sabarmati River. The ashram was the residence of Mahatma Gandhi. From this Ashram, Gandhi started the Dandi March in 1930. The ashram now has a museum, Gandhi Smarak Sangrahalay. The museum building was erected (designed by architect Charles Correa), and memorial activities were then started here. One of the important activities undertaken is the establishment of a Gandhi Smarak Sangrahalaya. Initially started in ‘Hriday Kunj,’ Gandhi’s own cottage in the Ashram, the Sangrahalaya has now shifted to its own well-designed and well-furnished building. Exhibits at the museum include Gandhi quotations, letters, and life-size oil painting gallery.

Akshardham temple – Akshardham temple is located in the Gandhinagar; its distance from Ahmedabad is 30KMS. Spread over nine hectors it includes a huge temple built in pink stone & white marble. Akshardham complex, a delicate and beautiful architectural masterpiece – the Akshardham Monument – enshrines the golden murti (idol) of Lord Swaminarayan, the founder of the Swaminarayan Faith. There are some exhibitions will be there. From the exhibition ideals of Indian culture are brought to life through the most modern exhibition technology. Shows, walk-through dioramas, audio-visuals, light and sound programs, and surround experiences within the 45,000 sq. ft. of exhibition space, educate and enthrall visitors. Sahajanand Hall depicts the life of Lord Swaminarayan.

Iskon Temple – ISKCON is the abbreviation for International Society for Krishna Consciousness. This temple depicts Lord Krishna with his beloved lover Radha, who is regarded as the epitome of true love. Three 50-ft diameter stone shikhars (domes) hand-carved with depictions of Krishna’s pastimes, rise more than 100 ft. above the 25,000-sq-ft temple. The building, blending Gujarat Sompura, and Rajasthani Khamira architectural styles, sits on four acres and features one of the largest temple rooms in India. The 12,000-sq-ft hall can accommodate 4,000 people and is home to the Deities of Radha-Govinda, Gaura-Nitai, Sita-Rama-Laksman-Hamuman, and Sri Nathji, as well as murti forms of Srila Prabhupada and Srila Bhaktisiddhanta Saraswati. Decorations include ornate stone-clad pillars, marble flooring engraved with colored granite designs, windows intricately carved in Rajasthani Mewas style, and Khemira and Araish decorated ceilings. Hate Singh Jain Temple- It was built by Seth Hate Singh in 1850. It is easily distinguished by its high carved column, visible from the road. Built entirely of white marble embossed with smooth carvings of dancers, musicians, animals & flowers, this serene temple is dedicated to Dharamnath, whose statue stands in the main temple. It has a paved courtyard surrounded by an imposing row of cloisters containing 52 shrines, each with an image of a Tirthankara, profusely decorated with rich carvings, one containing the marble image of the 15th Tirthankara. The temple is a two-storied structure with elaborate porches on three sides and front porch crowned by a large dome.

Vaishno Devi Temple – This temple is placed around a few kilometers from Ahmedabad is one of the prominent attraction to the town. Vaishno Devi temple is very Popular Temple to the Goddess Vaishno Devi in Ahmedabad. It is modeled after and is a scale replica of the Vaishno Devi Temple in the Indian State of Jammu and Kashmir in northern India. The temple draws huge crowds of devotees from all over India. Law Garden – Law garden is a vibrant open market where we can purchase jewelry, apparel, and handicrafts. It’s a good place to get Chaniya – Cholis (traditional dress worn in Navratri). It is a hub of local vendors who sells excellent clothing items and handicraft materials. These shopping centers are more popular with the locals since it sells fine verities of Navaratri outfits. Law garden offers something to everybody is it kids, youth or the old.

Day 3: DWARKA FULL DAY VISITS
Dwarka is one of the four most sacred Hindu pilgrimage sites of India; Sri Krishna renounced war in Mathura for the greater good of the people living in the region (and was hence known by the name Ranchodrai’) and founded the city of Dwarka. It is also the ancient kingdom of Shri Krishna and is believed to have been the first capital of Gujarat. Dwarka was a planned city, on the banks of Gomti River. For the safety of the people, Krishna and the Yadavas decided to move the capital from Mathura to Dwarka. It is a remote feeling and an interesting town. Sightseeing in Dwarka is Dwarkadish temple, Rukhmani temple, Gopi Talav (Pond), Nageshwara Jyotirling, Beyt Dwarka.

Dwarkadish Temple – The dwarkadish temple is also known as Jagat temple or temple of the world dedicates the place where ‘Sambah’ the great-grandson of Shree Krishna built a temple more than 2500 years ago. The present temple dates from the 15th – 16th century.
It is splendidly set on the sea coast. The temple has a five-story tower with a banner decorated with symbols of the Sun & the Moon. The temple is made of limestone and sand. There is a flag hoisted in the temple tower four times each day, which waves in the air beautifully welcoming the pilgrims. The structure of the temple is quite complicated. There are two gateways: Swarga Dwar, where pilgrims enter, and Moksha Dwar, where pilgrims exit.

Rukhmani Temple – One other important site is the Rukhmani temple which is a fine example of Hindu architecture of Gujarat of 12th – 13th century. Rukhmani Temple is located 2 KMS away from Dwarka There is a myth associated with it once Krishna and Rukhmani went to ‘Durvasha rushi’ to invite him at Dwarka. He was agreed on the condition that they (Krishna & Rukhmani) have to carry the cart instead of any animal. Krishna & Rukhmani happily agreed to do so. While driving the cart, Rukhmani became thirsty. Then Krishna stopped the cart and made water from Holy River Ganga by pressing leg thumb at land. ‘Durvasha’ upset by the action and nuisance Rukhmani to stay away from Shree Krishna Hence Rukhmani temple is located 2 KMS. Away from Dwarka’s Jagat Mandir.

Nageshwar Jyotirlinga – It is located on the route between Dwarka and the Beyt Dwarka Island, on the coast of Saurashtra in Gujarat. This temple enshrines one of the 12 Jyotirling in INDIA. This powerful Jyotirling symbolizes protection from all poisons. It is said that those who pray to the Nageshwar Ling become free of poison. According to Shiv Puran, a Shiva devotee by name Supriya was attacked by a demon Daruka while in a boat. The demon imprisoned him along with several others at his capital Daruka vana (Jungle) where he resided with his wife Daruki. Supriya advised all prisoners to recite the mantra ‘Om Namah Shivaya’. When Daruka came to know about this he ran to kill Supriya. Instantly Lord Shiva appeared in the form of a Jyotirling. One of the Nageshwar’s attractions is the 26 m statue of a sitting Shiva outside.

Beyt Dwarka – Beyt Dwarka is located 30 km north of Dwarka on an island in the middle of the Arabian Sea, next to the coastal town of Okha. Here Vishnu is said to have killed a demon. Beyt Dwarka is considered the original residence of Lord Krishna. The main temple was built about 500 years ago by Shri Vallabhacharya, a famous guru of the Pushtimarg Sampradaya and has an idol believed to have been made by Rukhmani. The traditional donation of rice to Brahmins has special importance here, as it is believed to be the place where Krishna’s friend Sudama presented him with rice. The temple complex includes several small temples dedicated to Shiva, Vishnu, Hanuman, and Devi. There is a deserted beach on the northern coast.

Gopi Talav – Gopi Talav is 21 km far from Dwarka. It is a small pond. Gopi’s used to take bath in this lake so it is called Gopi Talav. The main attraction of Gopi Lake is Mahaprabhu Ji Bethak. The earth of the lake is yellow sand which is known as Gopi Chandan. The devotees take Gopi Chandan, believing it to be very good for skin disease. Lord Krishna often meets Gopi’s here, played Ras Leela with them and also played the flute.

Day 4: DWARKA – PORBANDAR – SOMNATH (VERAVAL) (240 KM / 6 – 7 HOURS WITH S/S PORBANDAR)
Morning drives to Porbandar (120 km / 2.5 Hours), Porbandar is situated on the western coast of Saurashtra, Gujarat, lays the harbor city of Porbandar, better known as the birth-place of Gandhi – The Father of The Nation. Extremely poor but self-respected Sudama and Krishna’s friendship brings tears of joy when remembered. The Jethwa Rajputs named it their capital and ruled from it for 1200 years.

Kirti Temple– The major attraction for most visitors to this city is the three-story house where Gandhi was born in 1869. The Kirti Mandir memorial built next to Mahatma Gandhi’s birthplace lies in the old walled township of Porbandar between the gates and the Manek Chowk. The place where his mother gave birth is marked with a Swastika. Closest to the many year’s old residences is the 24 m (79 feet) high Kirti Mandir with 79 lamps on its peak – one for each year of Gandhi’s life. Here we can see the photographs, study room of Gandhi, Library, Prayer hall, etc.

Sudama Temple– It is associated with a popular story of Krishna and his dear friend Sudama. The shrine marks where Sudama’s hut once stood and is the only temple dedicated to him in India. Continue drives to Veraval / Somnath (120 km / 2.5 Hours), Evening visits of Somnath temple & lighting show.

Somnath Temple – Somnath is a Lord Shiva temple known as Jyotirlinga built by Moon God. Somnath is one of 12 jyotirlingas. The temple of Somnath itself is believed to have appeared first in gold, at the request of the sun god, next in silver, created by the moon god, a third time in wood at the command of Lord Krishna & finally in stone built by Bhimdeva. The temple to the tenth century when it becomes rich from follower donations, such wealth become to the attention of the Mahmud of Ghazni who destroyed the place of pilgrimage & carried its wealth off to Afghanistan. The current temple was built to traditional designs on the original coastal site. Walking distance from the temple is the Prabhas Patan museum housing architectural fragments of the original temple of the Somnath before they were destroyed by invaders. The present temple, built in 1947 – 95, is the seventh reconstruction on the original site. It is illuminated every evening and the sound, light show. The sea at Somnath is rough, not safe for swimming.

Morning departures transfer to Rajkot / Ahmedabad or journey to the next destination.